This post is inspired from the following write-up which shows how to generate a thumbnail from a video using S3, Lambda and AWS Fargate. We will be creating all these resources using the CDK.

To follow along, I would suggest cloning the repo and installing the dependencies.

Let's start with the resources that we need to create to run this. I'm excluding the imports here to make the snippets smaller, but you can easily find them in the above repo.

First, we will create the VPC in which we want to run our Fargate task.

This will create our VPC with 4 subnets (2 Public and 2 Isolated) in each availability zone with the cidr specified. We will be launching our Fargate task in public subnets as it requires internet access.

Now, let's create our ECS Cluster that our Fargate task will run in, and the S3 bucket which will be storing our uploaded videos and the generated thumbnail.

Note: We have specified removalPolicy and autoDeleteObjects to make it easier to delete this stack, but this is not recommended in production as it will cause data loss.

Now come the exciting parts. Let's continue further by creating the task definition and container that will be run when we execute the Fargate task.

The first line creates a Fargate task definition where we provide the name GenerateThumbnail along with memory and CPU limits which should be enough for generating thumbnails.

Now as we need to read the video from the bucket and write the thumbnail back to the same bucket, we need permissions on that bucket. The line:

is a construct provided by CDK and is a handy way of saying grant this Task definition's taskRole read and write access to the bucket we created above. This is one of the reasons why I love writing CDK constructs :)

Finally we have a snippet that adds a container to the taskDefinition. This contains 3 parts:

The next part is creating the Lambda function which the S3 bucket will trigger on object creation.

This will create the Lambda function using the createLambdaFn helper function that just uses the aws-lambda-nodejs module under the hood. We have specified some environment variables here as well that we need to look at.

Now, this Lambda function needs to run the Fargate task and also needs to pass the role to the task that will be running. For this, we need to add a couple of permissions to the function's role.

The first role allows the function to run the Fargate task that we have created above by passing the taskDefinitionArn to the resources.

The second role is special. This makes sure that when Lambda creates the ECS task and runs it, it has the permission to pass the taskRole and executionRole to the running task. iam:Passrole is a safeguard by AWS that makes sure no resource can pass elevated privileges that it's own.

Note: For those who do not know what iam:Passrole does, here's a great article by Rowan Udell on what the use case for this is and I would highly recommend reading this!

The final snippet is adding a trigger to fire the function we created above whenever a new object is created in S3.

We listen for objects being created but with specific constraints. The object should have the videos/ prefix, or as per the S3 console be in the videos folder and it should have an .mp4 extension.

Note: It's needed to have a prefix when you are going to add something back to the same bucket or else the Lambda will trigger infinitely! So the best way is listening for objects in a specific prefix and creating objects in another prefix if working in the same bucket.

Now as we're done with the constructs, let's look at what the Lambda function has. This is available in the functions directory.

These are all the environment variables needed that we defined while constructing our Lambda function and which we will be passing to the Fargate task.

Next, let's move on to where the function is defined.

We initialise the ECS instance and this is our main handler where we get the event (S3Event) in which we get all the details of the uploaded object or video in our case.

In this handler, we extract all the values needed like the bucket name, object key and send them all to the generateThumbnail method which we will view below.

Note: I have provided a static frame position here, but to make this dynamic, it can come from the file name or an external API.

The first block in this function defines the parameters to run the ECS task. The gist of this is that we want to create run just a single instance of this Fargate task with the given task definition inside the cluster that runs the VPC and public subnets obtained from environment variables.

We also add something called containerOverrides where we pass the container name that needs the environment variables. In these variables, we pass all the values we constructed in the Lambda handler above like the uploaded videoURL, the new thumbnailName and framePosition for which we want the thumbnail.

Finally, in the try/catch block, we run our ECS task via ecs.runTask and log the success and error states which will be visible in CloudWatch.

The Dockerfile creation is quite simple. You can either create your own and deploy it on DockerHub or use the one I created available here.

We have two files here that will constitute our image. Let's have a look at the Dockerfile first.

What we do here is use the jrottenberg/ffmpeg image and install the AWS CLI. This is required to download the video and upload the thumbnail that ffmpeg will process.

The last two lines are important here. We copy a certain copy_thumbs.sh file and add it to our ENTRYPOINT that will be executed when our container is run. Let's look at this file now.

This file firstly downloads the provided file URL as video.mp4. Then we run the ffmpeg binary to create a thumbnail from the video on the frame position we specified and outputs it to the name we specified in OUTPUT_THUMBS_FILE_NAME. Finally, we upload the thumbnail to S3 in our thumbnails prefix/folder and this is again done by the CLI command aws s3 cp.

As we're done with the constructs and functionality, let's deploy this CDK project and test it out. we need to run yarn cdk deploy or yarn cdk deploy --profile profileName if you are using a different AWS profile.

Now we have deployed the application, you should be able to see a bucket created like this. The name would be different in your environment.

Let's create the videos folder and upload a video to check if our thumbnail generation task is working. I have uploaded quite a famous video used widely for testing that you can use too.

After this upload is done, you should see a success message from S3 in this way:

On inspecting the logs, we see that the ECS task has run successfully. 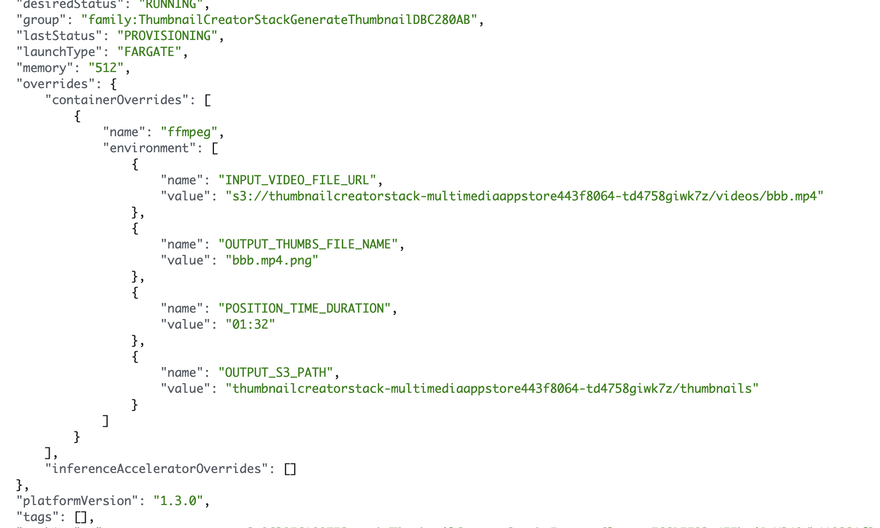 Let's also check our Fargate task logs to confirm if the thumbnail has been created. 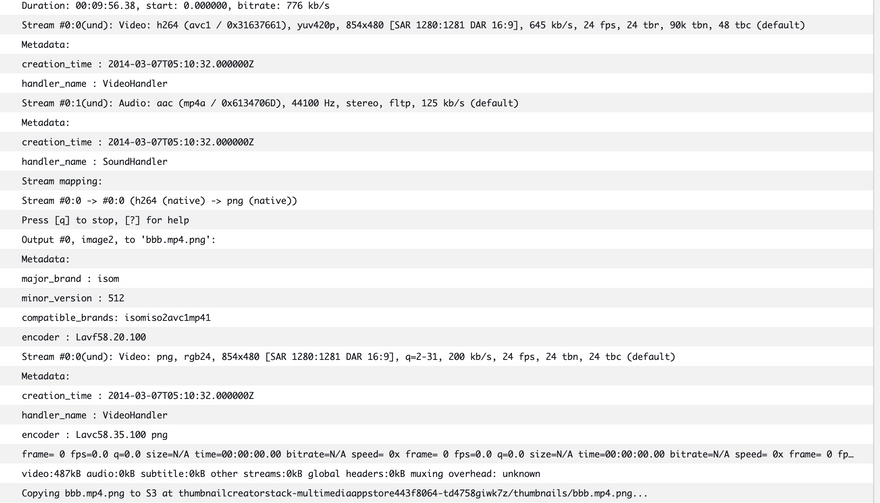 This means that our task has completed successfully! Finally let's check our S3 bucket and confirm. Voila! The thumbnail has been generated successfully and the output is exactly at the provided frame :) 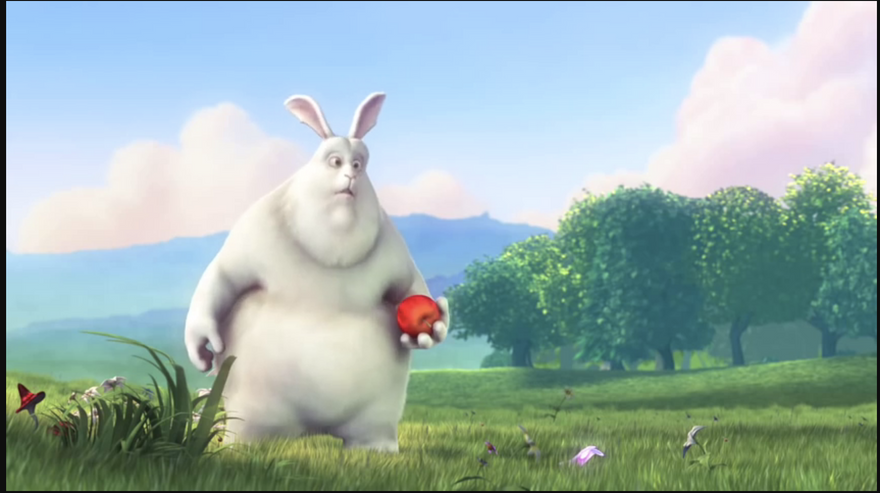 So this is how we can generate thumbnails for our video in a truly serverless fashion by using a combination of Lambda and Fargate.

Again the link to the repo if you haven't checked it out yet :)

I hope you liked this post, so it would be great if you could like, share, and also provide some feedback if I have missed something. Thanks for reading!

Once suspended, ryands17 will not be able to comment or publish posts until their suspension is removed.

Once unsuspended, ryands17 will be able to comment and publish posts again.

Once unpublished, all posts by ryands17 will become hidden and only accessible to themselves.

If ryands17 is not suspended, they can still re-publish their posts from their dashboard.

Once unpublished, this post will become invisible to the public and only accessible to Ryan Dsouza.

Thanks for keeping AWS Newbie Tips Community 💻 safe. Here is what you can do to flag ryands17:

Unflagging ryands17 will restore default visibility to their posts.