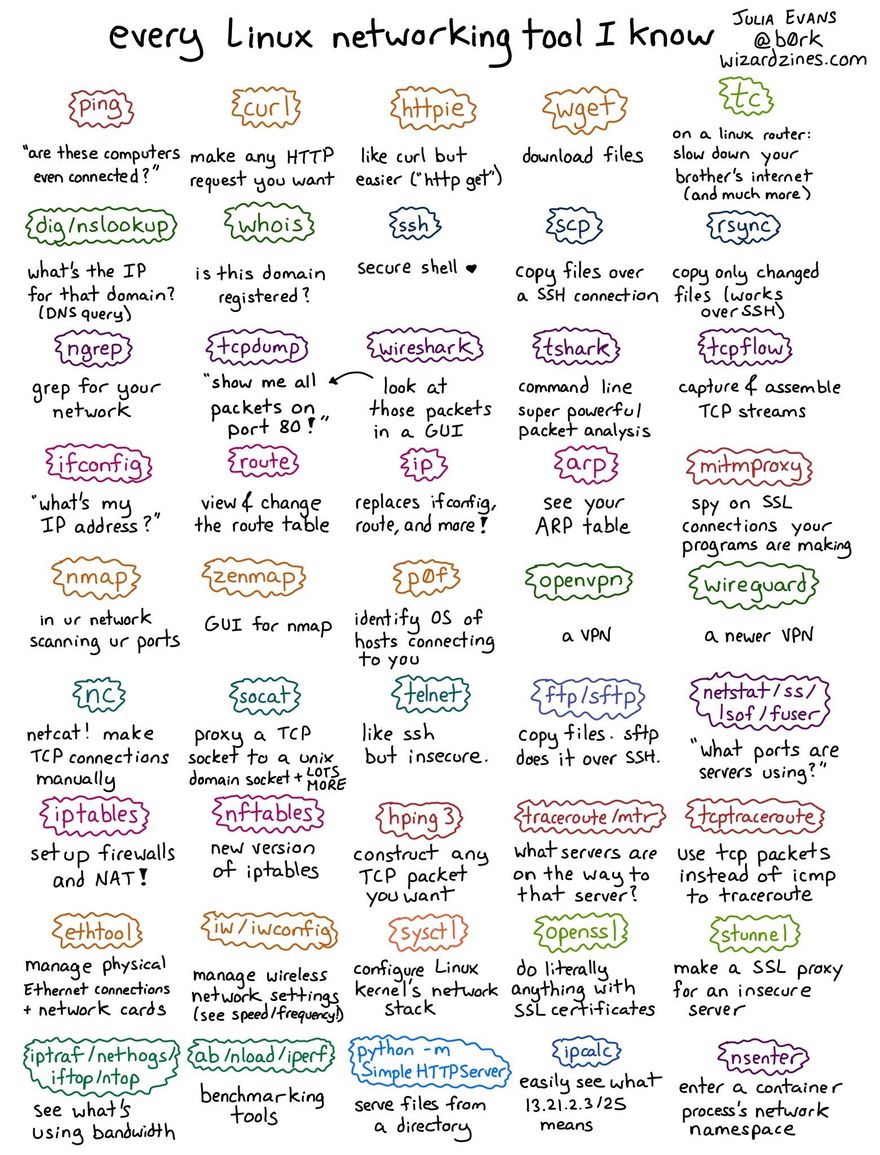 GNU Wget is a computer program that retrieves content from web servers. It is part of the GNU Project. Its name derives from "World Wide Web" and "get." It supports downloading via HTTP, HTTPS, and FTP.

tc is the user-space utility program used to configure the Linux kernel packet scheduler. Tc is usually packaged as part of the iproute2 package.

nslookup is a network administration command-line tool for querying the Domain Name System (DNS) to obtain the mapping between domain name and IP address, or other DNS records.

WHOIS is a query and response protocol that is widely used for querying databases that store the registered users or assignees of an Internet resource, such as a domain name, an IP address block or an autonomous system, but is also used for a wider range of other information. The protocol stores and delivers database content in a human-readable format. The current iteration of the WHOIS protocol was drafted by the Internet Society, and is documented in RFC 3912.

The Secure Shell Protocol (SSH) is a cryptographic network protocol for operating network services securely over an unsecured network. Its most notable applications are remote login and command-line execution.

Secure copy protocol (SCP) is a means of securely transferring computer files between a local host and a remote host or between two remote hosts. It is based on the Secure Shell (SSH) protocol. "SCP" commonly refers to both the Secure Copy Protocol and the program itself.

rsync is a utility for efficiently transferring and synchronizing files between a computer and a storage drive and across networked computers by comparing the modification times and sizes of files. It is commonly found on Unix-like operating systems and is under the GPL-3.0-or-later license.

ngrep is a network packet analyzer written by Jordan Ritter. It has a command-line interface, and relies upon the pcap library and the GNU regex library.

tcpdump is a data-network packet analyzer computer program that runs under a command line interface. It allows the user to display TCP/IP and other packets being transmitted or received over a network to which the computer is attached. Distributed under the BSD license, tcpdump is free software.

Wireshark is a free and open-source packet analyzer. It is used for network troubleshooting, analysis, software and communications protocol development, and education. Originally named Ethereal, the project was renamed Wireshark in May 2006 due to trademark issues.

In computing, route is a command used to view and manipulate the IP routing table in Unix-like and Microsoft Windows operating systems and also in IBM OS/2 and ReactOS. Manual manipulation of the routing table is characteristic of static routing.

iproute2 is a collection of userspace utilities for controlling and monitoring various aspects of networking in the Linux kernel, including routing, network interfaces, tunnels, traffic control, and network-related device drivers.

The Address Resolution Protocol (ARP) is a communication protocol used for discovering the link layer address, such as a MAC address, associated with a given internet layer address, typically an IPv4 address. This mapping is a critical function in the Internet protocol suite. ARP was defined in 1982 by RFC 826, which is Internet Standard STD 37.

Nmap is a network scanner created by Gordon Lyon. Nmap is used to discover hosts and services on a computer network by sending packets and analyzing the responses.

Nmap is a network scanner created by Gordon Lyon. Nmap is used to discover hosts and services on a computer network by sending packets and analyzing the responses.

p0f is a passive TCP/IP stack fingerprinting tool. p0f can attempt to identify the system running on machines that send network traffic to the box it is running on, or to a machine that shares a medium with the machine it is running on. p0f can also assist in analysing other aspects of the remote system.

WireGuard is a communication protocol and free and open-source software that implements encrypted virtual private networks (VPNs), and was designed with the goals of ease of use, high speed performance, and low attack surface. It aims for better performance and more power than IPsec and OpenVPN, two common tunneling protocols. The WireGuard protocol passes traffic over UDP.

netcat is a computer networking utility for reading from and writing to network connections using TCP or UDP. The command is designed to be a dependable back-end that can be used directly or easily driven by other programs and scripts. At the same time, it is a feature-rich network debugging and investigation tool, since it can produce almost any kind of connection its user could need and has a number of built-in capabilities.

SFTP may refer to:

The Unix command fuser is used to show which processes are using a specified computer file, file system, or Unix socket.

iptables is a user-space utility program that allows a system administrator to configure the IP packet filter rules of the Linux kernel firewall, implemented as different Netfilter modules. The filters are organized in different tables, which contain chains of rules for how to treat network traffic packets. Different kernel modules and programs are currently used for different protocols; iptables applies to IPv4, ip6tables to IPv6, arptables to ARP, and ebtables to Ethernet frames.

nftables is a subsystem of the Linux kernel providing filtering and classification of network packets/datagrams/frames. It has been available since Linux kernel 3.13 released on 19 January 2014.

hping is an open-source packet generator and analyzer for the TCP/IP protocol created by Salvatore Sanfilippo . It is one of the common tools used for security auditing and testing of firewalls and networks, and was used to exploit the idle scan scanning technique, and now implemented in the Nmap Security Scanner. The new version of hping, hping3, is scriptable using the Tcl language and implements an engine for string based, human-readable description of TCP/IP packets so that the programmer can write scripts related to low level TCP/IP packet manipulation and analysis in a short time.

In computing, traceroute and tracert are computer network diagnostic commands for displaying possible routes (paths) and measuring transit delays of packets across an Internet Protocol (IP) network. The history of the route is recorded as the round-trip times of the packets received from each successive host in the route (path); the sum of the mean times in each hop is a measure of the total time spent to establish the connection. Traceroute proceeds unless all sent packets are lost more than twice; then the connection is lost and the route cannot be evaluated. Ping, on the other hand, only computes the final round-trip times from the destination point.

ethtool is the primary means in Linux kernel-based operating systems for displaying and modifying the parameters of network interface controllers (NICs) and their associated device driver software from application programs running in userspace.

sysctl is a software utility of some Unix-like operating systems that reads and modifies the attributes of the system kernel such as its version number, maximum limits, and security settings. It is available both as a system call for compiled programs, and an administrator command for interactive use and scripting. Linux additionally exposes sysctl as a virtual file system.

OpenSSL is a software library for applications that secure communications over computer networks against eavesdropping or need to identify the party at the other end. It is widely used by Internet servers, including the majority of HTTPS websites.

IPTraf is a software - based console that provides network statistics. It works by collecting information from TCP connections, such as statistics and activity interfaces and drops TCP and UDP traffic. It is available in Linux operating systems.

Iperf is a tool for network performance measurement and tuning. It is a cross-platform tool that can produce standardized performance measurements for any network. Iperf has client and server functionality, and can create data streams to measure the throughput between the two ends in one or both directions. Typical iperf output contains a time-stamped report of the amount of data transferred and the throughput measured.

An AWS Newbie Guide to Getting Started with AWS

What are ec2 instances in AWS?

lee
Learning AWS can be a life changer and I want to ensure that I pass some of that energy on, reach back and pull someone up as they say, especially young people regardless of education and background.
What the hell does AWS EC2 mean?
#ec2 #concepts
Some of the best AWS IAM analogies
#iam #concepts #identity #security
Azure AD with AWS SSO
#concepts #azuread #mfa #security